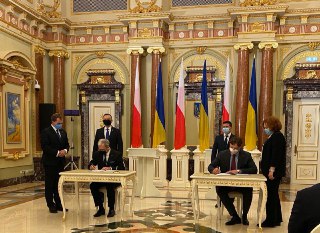 The signing of the mentioned document opens possibilities for the one of the biggest companies in Poland to explore information on objects for investment via transparent privatization.

“We ensure such unprecedented openness and transparency of the privatization process, equal conditions for participation to every Ukrainian potential investor, as well as to foreign one”, - the Head of the State Property Fund of Ukraine Dmytro Sennychenko stated.

The signing of the agreement became possible through negotiation, held  in September 2020, between the Head of the State Property Fund of Ukraine Dmytro Sennychenko and the official representative of PGNiG in Ukraine Ireneusz Derek, during wich Derek informed on PGNiG’s plans to invest in Ukrainian energy sector.

Entry to the Ukrainian energy market by the one of the biggest European companies is, in general, a positive indicator of the Ukraine’s investment attractiveness for the foreign business.

For reference: PGNiG is the one of the most biggest companies in Poland with market capitalization of about EURO 7 billion, which explores and extracts natural gas and crude oil in Europe and Africa. GPNiG is also actively engaged in gas and liquid fuel import, storage, sale and distribution, as well as heat and electricity production.