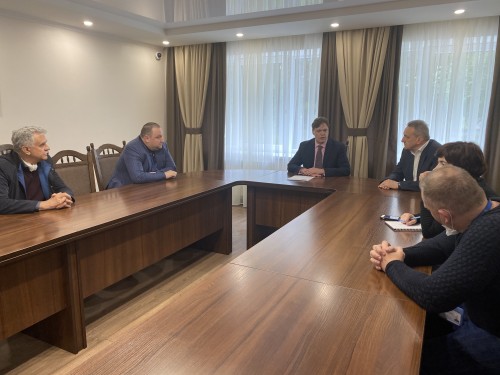 On May, 29, 2020, the Head of the State Property Fund of Ukraine Dmytro Sennychenko personally presented Oleksandr Korchynskyi before the PJSC «Centrenergo» team as a new Acting General Director of the enterprise.

“The tasks of the new Director of PJSC «Centrenergo» are getting current operating activities of the company under control, complete the annual company’s financial report and audit, ensure stable salary payments to employees and provide sustained cooperation with the State Property Fund on preparing the company for the large-scale privatization to attract investments”, Dmytro Sennychenko noted.

Over recent years, PJSC «Centrenergo» has become a center of corruption. According to experts, since 2004 funds from this state-owned enterprise have been withdrawn in the amount of UAH 100 billion. In 2013 and 2018, there were also two unsuccessful attempts to privatize PJSC «Centrenergo». As of today, over 17 thousand documents on this enterprise are registered in the Unified Register of Court Decisions.

PJSC «Centrenergo» has already stopped its work several times; in 2004 there was an attempt to bring the company to artificial bankruptcy; in 2015 - 2016, doubtful purchases took place through intermediary companies from the Russian Federation and temporarily occupied and uncontrolled territories of Ukraine; in 2015 the Vuhlehirska CHP (combined heat and power station) stop workflow due to contrived scarcity of coal.

On February, 17, 2020, due to the worsening of financial and economic standing of PJSC «Centrenergo», the Working Group of the SPFU on consideration of applicants’ documents for temporary exercise of authority of the business entities’ heads that are under management of the State Property Fund of Ukraine, considered documents of 17 applicants for the temporary Acting General Director of PJSC «Centrenergo» and Oleksandr Korchynskyi was determined as such a candidate and submitted for approval to the Cabinet of Ministers. The appointment of Korchynskyi as the Acting General Director of PJSC «Centrenergo» was approved by the Resolution of the Cabinet of Ministers of Ukraine, dated by 26.02.2020 № 205-р.

Oleksandr Korchynskyi has 20 years’ experience in management positionsand last 10 years - in the energy sector. It is especially important he has experience in transforming unprofitable enterprises and bringing them to profitability. He collaborated with the World Bank on the Project «Increased energy efficiency in district heating sector of Ukraine», and was a co-author of the Law of Ukraine «On the Electricity Market».