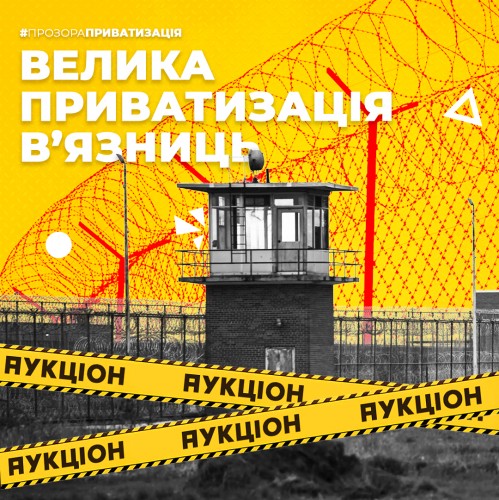 As part of the joint project of the State Property Fund and the Ministry of Justice called “Large-scale Privatization of Prisons”, the privatization of the property of the non-functioning Lviv Penal Colony (No.48) was auctioned online with a winning rate of UAH 377.5 million.

Privatization of this object of the penitentiary system will provide receipts to the State Budget and will become a financial source for building a new institution with modern conditions outside the city, and will attract multimillion investments in creation of new job opportunity and local economic development.

Chairman of the State Property Fund Dmytro Sennychenko stated about this, commenting on the results of the auction, which took place on June 3:

“The first successful auction in the framework of the “Large-scale Privatization of Prisons” took place today. The property of the non-functioning Penal Colony No. 48 was privatized, this object is in an abandoned state and occupies almost the whole quarter in the central part of Lviv. The privatization of this asset will ensure the attraction of multimillion-dollar investments, creation of new job opportunity and local development.”

Seven participants took part in the auction for privatization of separate property of Penal Colony No.48, the starting price was increased almost three times - from UAH 132,674,304 to UAH 377,500,000.

According to the Chairman of the State Property Fund, in addition to the “Large-scale Privatization of Prisons”, the State Property Fund continues to privatize distilleries as part of the demonopolization of the alcohol industry, and is ready for the Large-scale Privatization – holding auctions for objects whose book value exceeds UAH 250 million the first for many years.

“We are on the verge of a decisive event. For the first time since the privatization of Kryvorizhstal in 2005, large-scale privatization auctions will be held this year. The first objects will be JSC “United Mining and Chemical Company”, Plant “Bilshovyk” and Hotel “President”, – said Dmytro Sennychenko.

Thus, the Fund has already completed the preparation of the first object of large-scale privatization – JSC “UMCC” and in the summer, for the first time in 15 years, a historic event will take place, which will bring billions of hryvnias to the State Budget. Currently, we are only waiting for the approval of the Cabinet of Ministers to the conditions of the auction.