Starting price and terms for privatization of UMCC JSC: Dmytro Sennychenko spoke about the first asset from large-scale privatization in 2021 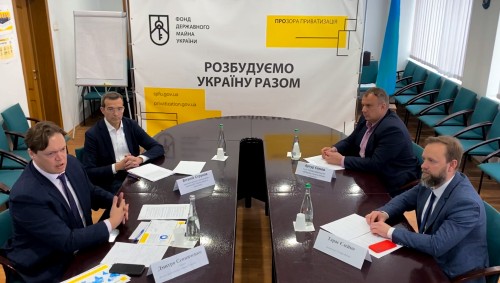 On April 19, 2021, Dmytro Sennychenko, Chairman of the State Property Fund of Ukraine held an online press conference, at which he spoke about the developed privatization conditions and the determination of the starting price for United Mining and Chemical Company JSC.

“UMCC JSC will become the first object of large-scale privatization, which after its unblocking will be put for a transparent auction. The privatization advisor has determined and proposed the starting price of UAH 3.7 billion. In the same time, the Auction Commission has developed the conditions for privatization, which must be approved by the Cabinet of Ministers of Ukraine”, Dmytro Sennychenko informed.

According to the Chairman of the Fund, several factors influenced the formation of the starting price:

·        increasing the reserves of the Vilnohirsk Mining and Metallurgical Combine by 2 times;

·        improving financial performance, in particular an increase in operating profit.

Artur Somov added that in the process of preparing for privatization, the company has eliminated corruption schemes, which also has a positive effect on the formation of the starting price: “Systematic work to clean up the company from corruption and shadow management is one of the main goals, and today it makes it possible to renew the company’s financial performance, as well as to attract the attention of both domestic and foreign potential investors.”

We have developed clear conditions for potential investors. These include compliance with social and environmental conditions, as well as modernization of production.

The next stage of the privatization of UMCC JSC is the approval of the sale conditions of the company by the Cabinet of Ministers of Ukraine.

“UMCC JSC is the first, but not the last object of large-scale privatization, which will be put up for a transparent auction. In 2021, the next objects will be the Plant “Bilshovyk” and President-Hotel. The privatization of these non-core state assets will ensure the attraction of sustainable investment, the creation of new jobs and the growth of the Ukrainian economy”, Dmytro Sennychenko, Chairman of the State Property Fund, said.

UMCC JSC is a state-owned enterprise and one of the largest enterprises for the production of titanium raw materials in the world. UMCC structure includes Vilnohirsk Mining and Metallurgical Plant and Irshansk Mining and Processing Plant. In August 2016, UMCC JSC was included by the government on the privatization list. The date of its privatization has been postponed several times, most recently due to the blocking of a large privatization due to the Coronavirus pandemic.